Rolex Daytona has been very popular for more than half a century; no matter whether you are a serious collector or just a casual buyer, Daytona is kind of "must have" item in your collection. Today more ladies fall in love with Daytona, they might have been influenced by their boyfriends or their better halves. In my opinion, the demand for Daytona is so overwhelming because the model in general holds the value better than the other brands.

I talked to a local watch dealer the other day about how COVID-19 has a devastating impact on the luxury watch industry in Hong Kong … business crashed significantly. He has not seen the light at the end of the tunnel yet. However, the request for Daytona has not dropped at all, but conversely increased. The reason is simple. During this difficult time, people who still want to buy luxury watches of course would like to purchase the ones that can counter depreciation more robustly. For the "safe-haven consideration", Daytona would be one of the best choices in the market.

Auction results is definitely a push behind the scene to keep encouraging people to buy Rolex Daytona.

Just two days before the third wave of COVID-19 in Hong Kong, Sotheby's Hong Kong held its exhibition and auction of important watches at the Hong Kong Convention Centre. The focus of the auction is the cover lot - a platinum Daytona with lapis lazuli hardstone dial. According to the electronic version of watch catalogue from Sotheby's, it is the only-known Daytona watch, fresh to the market. The hammer price of the watch is HK$21 million. But the buyer needs to pay almost HK$25.4 million (around US$3.26 million), including commission fee for the auction house. It undoubtedly set a new record for an automatic Daytona watch.

In the history of Daytona, the collection has both manual winding and automatic movements. The one most people are wearing today is the automatic version. The manual winding is the earlier version of Daytona, dated back to the early 60s. Three years ago, an auction house, Philips, successfully sold a piece of Paul Newman Daytona at the price of almost US$18 million. You might ask, "Why was the watch sold at that crazy price?" The reason is very simple. The watch was previously owned by the Hollywood star, Mr. Paul Newman. This is what we called the "Celebrity Effect".

What happened to the one with lapis lazuli hardstone dial? Why were people so crazy for it? Did the watch also belong to someone very famous, like Mr. Paul Newman? Sorry to tell you that the answer is No! As a matter of fact, Sotheby’s did not disclose any detail about the identity of the owner of this platinum Daytona, but only mentioned that the watch was fresh to the market.

On the auction date of important watches, July 11, I was at the auction room to bid for my favorite piece, the Jaeger-LeCoultre ATOMS DU MILLENAIRE MARQUETERIE. Even though I was not successful, I still stayed behind to witness the whole process of the platinum automatic Daytona being sold at a new record high.

I observed that the ambience of the auction room had become more tense. It could be felt that the auctioneer deliberately slowed down the pace of the auctioning because more and more “big” pieces appeared, like PP 3700 and 3710. Finally, the highlight of the day - the platinum Daytona with lapis lazuli hardstone dial. After a series of biddings, the price went up to more than HK$10 million rapidly within five minutes. At that moment, the room was in dead silence. It seemed that everybody was holding his breath waiting for the next bid. Half way through, there were only three phone bids left. Every time, when a new bid increment was made, people at the room would applaud to show their excitements. Less than half an hour, a victor was born, but his identity was not disclosed.

Sometimes money fails to buy the thing you are obsessed with. In my opinion, if someone is willing to put an offer on the table for a watch, it would be definitely a nice watch; otherwise it is just a piece of metal. Whether the item is a watch or a piece of metal, it varies from person to person. My question is, “Why would one like to invest such a great deal of money on this platinum Rolex watch?”

First of all, the dial of this watch is made of lapis lazuli, a very interesting material that Rolex first ever used. Lapis lazuli is a precious stone but not as expensive as diamond. As Sotheby’s mentioned, the watch is fresh to the market, the only watch in the world, a unique piece.

Secondly, the reference number of this watch is 16516. It is believed that it belongs to a very small number of platinum Rolex Daytona produced in 1999. According to the current auction records, the lapis lazuli watch is the sister of the platinum mother-of-pearl Daytona that Sotheby’s sold in 2018 at the price of almost HK$7million. That outstanding auction result definitely offered a very aggressive reference, contributing a rocket push to the lapis lazuli watch today. Both watches share the same reference number of 16516. On top of that, the serial number of both watches starts with “A”, which makes them even more uncommon.

If you are familiar with Daytona, Rolex officially has been manufacturing that collection in stainless steel, yellow gold, rose gold and white gold only, but never in platinum until the celebration of the 50th anniversary of Daytona. It is not difficult to understand why platinum Daytona is so sought-after, “rare is precious”.

Thirdly, Rolex employed El Primero movements from Zenith for its Daytona watches from 1988 to 2000. Those Daytona watches from that period have become very desirable among the circles of watch collectors, who believed that “Rolex plus Zenith” is a very exceptional cross-over in today’s watch market.

Because of the great and different features mentioned above, the platinum Daytona with lapis lazuli hardstone dial of course became the highlight in the auction. I expect that the watch would fetch a handsome sum undoubtedly. However, I have never imagined that it would be sold at the price of around US$3.26 million.

Is it worth it? As I said before, it varies from person to person. But if you ask me, I would say I won’t pay such enormous amount to buy the watch. The reasons are very simple. From the perspective of ages, the watch (manufactured in 1999) is young and only around 20 years, not a vintage at all. The watch is even younger than Porsche 964, 993 and Ferrari 355. From the perspective of craftsmanship, the watch is a product from mass manufacturing. From the perspective of function, the watch only offers chronograph. You don’t have to pay US$3.26 million for Patek Philippe 6002 Sky Moon Tourbillon, which is one of the most complicated watches in the world including the functions of minute repeater, tourbillon and perpetual calendar.

PP6002 is not a unique piece, and the platinum Daytona with lapis lazuli hardstone dial is the only watch in the world. Still, I don’t think it is worth to spend such amount of money to buy this simple only watch. I am old-school. If I have this spending power, I would choose Chinese antique ceramics previously owned by emperors, they are also unique. As a matter of fact, they are more than unique and each piece contains the thousand-year Chinese history. 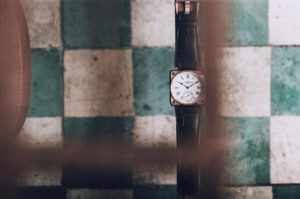